skip to main | skip to sidebar

Xzotika's Man In the Mirror 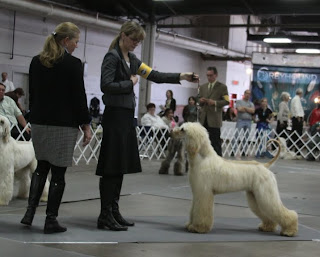 At the Louisville, KY cluster this year our 10 month old puppy Jackson won another 4pt major reserve under judge Mrs. Margaretta Patterson-Kauffman. Jackson was handled by his co-breeder Jennifer Taylor of Jolie Afghan Hounds. Little Jackson is having a great time at the shows and the judges are noticing him at this very early age. In addition to the judges, the ringside crowd is giving him a good look and the buzz is in the air. A recent bystander stated that Jackson reminded them of a young Coastwind Phobos. Another stated that his beautiful type is undeniably AFGHAN. The comments go on for our young prima donna. Look for Jackson at this years coveted Afghan Hound Club of America Breeders Cup